Fremantle will win the flag 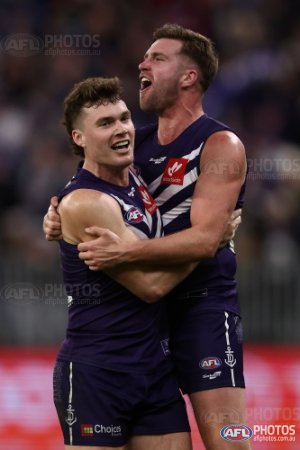 Fremantle's finals hopes were dead. They were buried, the tombstone had been erected, the family had grieved, the widow had moved on, remarried and opened a small pastry shop in Margert River that also sold the work of local artists, because she wanted to give back the community that had embraced her so warmly. They were long forgotten. Then the earth started to wobble a bit. There was a strange rumbling in the ground below, and all of a sudden 22 hearts in purple jumpers burst onto the footy ground and enacted the sort of event which usually involves a bunch of Hebrews wandering about with Jesus. Fremantle were beaten by quarter time. They'd kicked no goals, they didn't look like they even knew which posts were the ones to aim between. Then all of a sudden, they switched on and went about ripping the game away from the Bulldogs like an old man removing his mask with distain as he steps of the bus. It was sheer brutalism. No corner was cut, no step was left short, no ball remained unsmothered. They threw ever last bit of themselves at the football and by sheer force of will, overtook the Bulldogs in the last quarter to pull of one of the greatest wins in the history of man kicking a ball around. Three more games like that and they give us a flag.