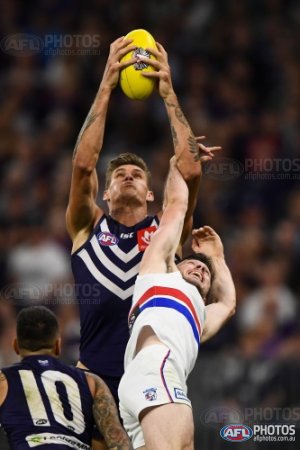 Ross Lyon was very coy about things during the week, so coy in fact that there were doubts he'd even name a team this week. Would Lobb play? Was Fyfe ok? Would Ross be coaching somewhere else next year? Would he be coaching at all? Was he going to give up the game, move to the country and eat a lot of peaches? No one knew. Peach farmers were probably a bit concerned but even they didn't know if he would still working in football next year or if he'd descend on them like a plague of ravenous locusts. The good news is, when push came to shove he decided he'd keep doing his job and put a team sheet in. Luckily it's a Sunday game so he didn't have to put too much thought into it, with Nat Fyfe returning from hospital to replace Cam McCarthy, who will have just as many teammates kick the ball to him if he's not playing, and then a bunch of blokes will jump onto the extended interchange bench with Hayden Ballantyne, Bailey Banfield, Mitchell Crowden and Lachie Schultz competing for spots with Andrew Brayshaw, Ethan Hughes and Taylin Duman.