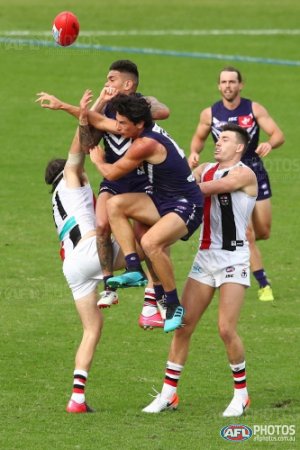 For Fremantle, it's an oppressive trip to the furthest corner of the east coast, for St Kilda it's a trip to freedom land, where children walk the streets and people can get their haircut with impunity, for all the supporters back in WA it's an event that one way or the other is going to end in a lot of new televisions being purchased. Either an upgrade or a replacement because of foot damage. Fresh from their magnificent win last week, albeit only over bottom 8 team West Coast, Fremantle are playing for a spot in the finals where they are expected, by some supporters present at the pub after the Derby win, to go all the way. Helping their cause will be the return of Andrew Brayshaw who was recently suspended for wearing purple on a weekend, with Blake Acres, Ethan Hughes and Joel Western jumping on the long interchange bench. Connor Blakely is out injured after flying too close to the sun by starting in the team last week instead of being the sub.