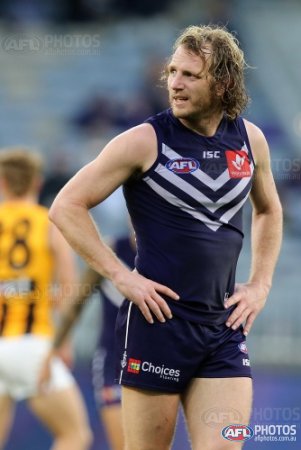 Great news for everyone who tried to run to the furthest part of the country to get away from Eagles supporters, you'll get to watch the Dockers play in Launceston this weekend. Although, based on last week that might just be salt in the wound. Either way, they know how to apply salt evenly to chips in that part of the world so it won't be a total bust. Word must be out about the salt coverage because the Fremantle players were pretty keen to get on a plane and get out of the stat...err over to Tasmania as quickly as possible. Rumour has it the pilot introduced himself as the getaway driver. With such a poor performance as Fremantle had in the Derby you'd expect some sweeping changes to the side but once again you'd be wrong. Aaron Sandilands is being rest because his one game for the year has taken it's toll, Griffin Logue has faced a similar burden and needs a rest. Mitch Crowden is also out but it turns out he just snuck his name into the team list last week anyway and was never supposed to be out there. Sean Darcy, Ryan Nyhuis and Stephen Hill all upset the coach so they have to play this week.