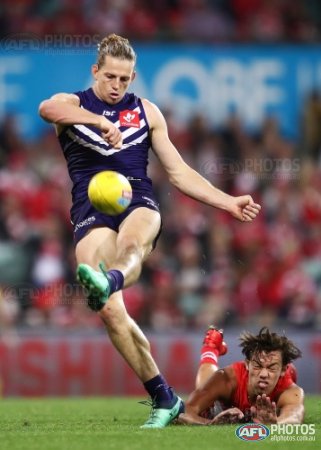 Round 18 and Fremantle's finals hopes are still alive...if you crink your neck and the right angle while reading the calculator...if it says boobs you crinked too far. This week Fremantle get a reprieve from the white hot teams in premiership form, playing the lowly Sydney Swans, who have left half their team at home because of their crippling botanophobia (look it up, it's a thing). Of course, Fremantle being Fremantle there's been a bit of a snag in their glorious return to the winner's circle, Nat Fyfe has forgotten to wash his sleeve thing again and has an elbow infection, so he won't be showing up on Saturday night. Less distressing is that Travis Colyerhas been dropped. He's joined by Ryan Nyhuis and Ethan Hughes who have also been given the chop. There's good news though, Stephen Hill and Aaron Sandilands have both recovered from their reported deaths and have been named for Saturday, with Taylin Duman, Griffin Logue and Brett Bewley also getting a gig.