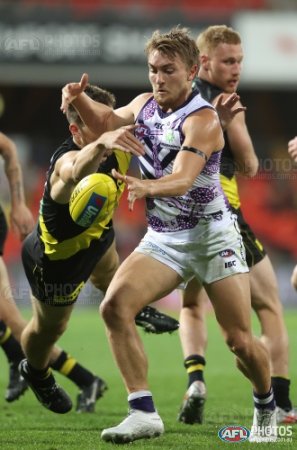 Presuming they don't have the covid, Richmond will sneak into WA this week to play Fremantle late on Sunday afternoon, on a what should be a cold evening, presumably in what Foxtel hope will be a big lead in to someone racist doing racist stuff on Sky News on a Sunday night. For the rest of us, bring a coat and try not to miss your stop when the windows fog up on the way home. Nat Fyfe has decided he's had enough for the year and went and got his shoulder operated on so he's not going to show, it's too late in the afternoon for Michael Walters so he reckons he's pulled a hammy and Alex Pearce's hair failed to protect his head from a run in with Buddy Franklin, so he's also going to sit the game out. Josh Treacy is back after missing last week and it's a Sunday so the bench is long,with Brett Bewley,Ethan Hughes,Nathan O'Driscoll and Tobe Watson the current ins.