The F.R.E.O. Speedwagon is back! 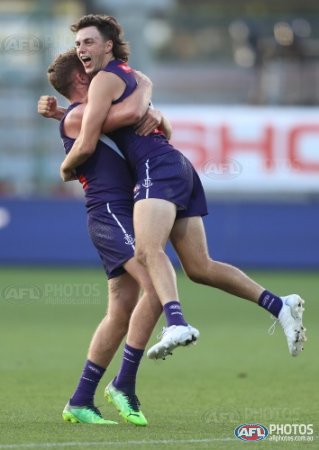 In what many are calling it the turning point in the history of the Fremantle Football Club, the Dockers have powered home to victory over a red hot Geelong, announcing that they're the real deal and a team to be feared. The Cats threw everything that had at the undermanned Fremantle, getting out to a worrying lead in the first quarter but the Dockers defence stayed cool and collected under the immense pressure, working the ball out time and time again with poise and precision…most of the time…and absorbing the best the Cats could hit them with. Fremantle worked their way back into the game in the second quarter and while the forwards were less precise than the defenders, they got plenty of the footy to bugger about with. Some of the more delicate supporters may have had a scare when Geelong got a few late goals to get within 3 points with 30 seconds to go but the more relaxed types knew that David Mundy would will the footy to the boundary line and shut the gate for a 3 point win.