Sunny one so true, we love you

Walters Does it Again 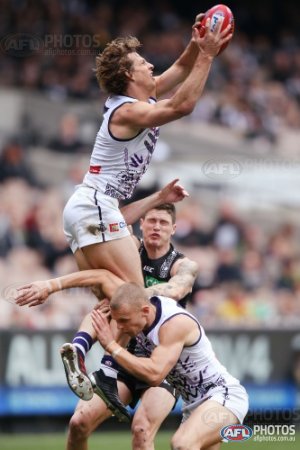 He's bloody well done it again. Michael Walters, the last minute, come from behind, purple saviour has given Fremantle the lead in the dying seconds and throwing shade on Jesus, bringing that many people back from the dead in consecutive weeks. Fremantle ripped the guts out the Collingwood supporters, with a miraculous victory over the previously fancied Collingwood in what may well be the best game of football they've played since the days when there was only one Avengers movie. A tight opening quarter had the Collingwood wood supporters concerned but the Magpies quickly opened Freo up in the second quarter, setting the game up for a miserably second half where Fremantle were expected to go on the back foot and limit the damage. But this week they decided to keep pressing on, leaving forwards forward and backing the defenders to do their job. The results were spectacular with a quick flurry of goals in the third quarter bringing the Dockers back into the match. They went blow for blow with the Pies for the rest of the afternoon, with Collingwood getting their noses in front, just before Nat Fyfe scrubbed one into the safe arms of Michael Walters who nailed the goal and cemented his place in Fremantle folklore.