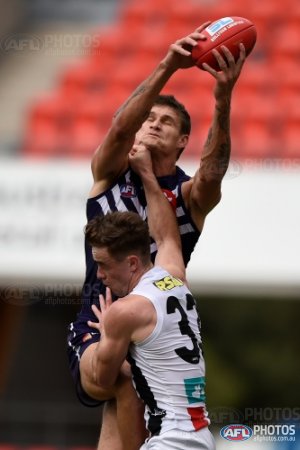 The game was over before quarter time. We've seen it play out dozens of times over the past 5 years. Fremantle frozen in the headlights as another team of dubious quality runs amok, unhindered by their purple opponent. 7 goals to 1 in the first quarter. What a debacle. Luckily no one told the players. After looking like a team who were already on the bus back to Perth, the Fremantle players had a sudden epiphany about competence. St Kilda on the other hand had packed their gear up, 4 points included, and were on their own team bus back to Noosa. The two events converged to get the Dockers back some credibility and by half time, it looked like the two teams might be happy just to agree on the margin and go their separate ways, and with the injuries piling up at Fremantle, they might have thought it was a good deal. But the young blokes at Freo, as yet unaccustomed to rolling over every week, had different ideas and took the fight to St Kilda. Eventually they stole back the lead, only to lose it in the dying minutes of the game. Up steps Lachie "SonSonSon" Schultz who took a great grab in the JLo position and followed his coaches lead to humiliate St Kilda once again, with a come from behind win.