Rolled. Rocked. Sent to the Bottom 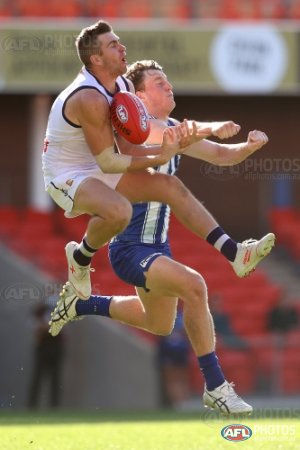 It's been a long time since Fremantle had the opportunity to not just win a game of footy but decimate an entire football club. After putting the final nail in Fiztroys' coffin back in the 90's, the Dockers have possibly backed it up with what many are predicting could be the end of the North Melbourne Kangaroos. Fremantle were magnificent from siren to siren, carving the Kangaroos up in a manner only dreamed of previously by the New South Wales National Party. Michael Walters had the ball on a string while Andrew Brayshaw ghosted David Mundy as they tried to out cool each other, all fed by Sean Darcy who gave old man Goldstein a few footy lessons. Jesse Hogan had a day out at full forward, with Matt Taberner showing they can both dominate in the forward line when people kick the footy to them properly. There were winners all over the ground, particularly in the backline where Luke Ryan picked up a wad of cash backing winners at the popup TAB. Next week is the last round and Freo are back at home - Cairns - where they take on the Bulldogs on Sunday evening.