Peaches Matera Gets Freo The Cream 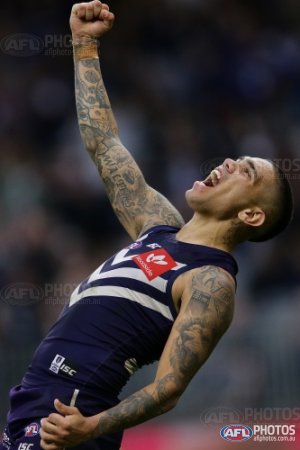 Peaches Matera and his little mate Selleys Walters have done it again, putting on a footy showcase to get Fremantle over the line after a tight, goal for goal battle with the once fancied Port Adelaide. Far from the drudgery and forced work camp feel of some of the games in the first half of the season, the Freo v Port game was a delight to watch, with a good time had by all. Both sides gave a good account of themselves, and took their chances in front of goals and it was anyone's game at three quarter time but the class of Walters and the cunning of Peaches saw Fremantle get their noses in front and dive their advantage home. And while it wasn't nessesarily the greatest game of football ever played but there were plenty of highlights, with Sean Darcy making himself known again, Jesse Hogan working himself into some form, David Mundy being David Mundy and Michael Walters putting in one of his absolute best games, and leaving the fans in awe of his all round awesome awesomeness.