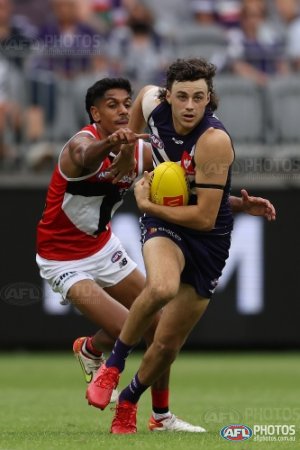 Fremantle v St Kilda in Tasmania has never been a showcase of football skills and unfortunately, the shift north to Hobart did nothing to improve on that. Worse still, Fremantle lead the way in the poor skills department, rushing their disposal and butchering their opportunities with the ball, as well as their opportunity to play in the finals. The Saints had the better of Fremantle for most of the day, but the Dockers clung to them, mostly through determination rather than anything resembling good footy but they were always in a position for things to click and the game to go their way. Four goals down and with one quarter to play, the game was up for grabs and Fremantle were still a chance to be the unlikeliest of finals contenders, but things went bad quickly. St Kilda put through three quick goals and the game was done, from their the Saints were just picking at the Freo carcass while the Fremantle supporters kept a close ear out for the siren, in case they missed it and had to endure one more second of the pain that was necessary.