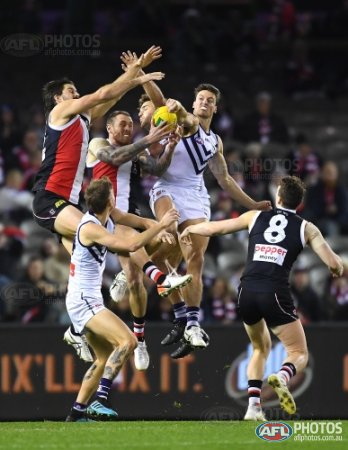 Fremantle can stop planning for September, with even the mathematicians calling the season, after Freo were knocked off by St Kilda in the dying seconds of their 12th virtual elimination final in a row. The Dockers had a slow start and the Saints fans seemed to settle in for a Bulldogs style thumping of the Bombers but Nat Fyfe dragged his team back into the contest with sheer willpower, and it wasn't long before it was the Saints looking shaky. But there was no doubt it was a late in the season contest between two struggling teams as patches of brilliance were interrupted by basic skill errors and bizarre decisions but at least it was an evenly matched series of patches of brilliance were interrupted by basic skill errors and bizarre decisions, the two teams making a good contest of it right to the final siren. It stayed tight for all of the second half, with Freo looking like their desperation in defence and Nat Fyfe were going to be enough to get the job done but it wasn't to be, with St Kilda getting two very late goals to sneak home with the win.