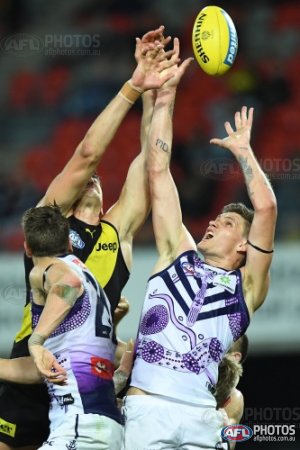 For a moment there it looked like Fremantle were going to make 2020 get a little bit crazier, with a daring upset over the reigning Premiers. Despite playing a game of football 3,500 km away with a three day break, Fremantle had the well rested Tigers worried for most of the night. Richmond had last played a week earlier, where the AFL gave them a similar sweetheart deal against a team travelling from WA and couldn't have started the game with any less respect for the opponents. They kicked a couple of quick goals and then spent the next hour doing a victory lap. Fremantle didn't get the message though and kept chipping away at the Tigers, dominating in the centre but with too much fumbling around the half forward line, they lacked for shots on goals. At the other end, Richmond were able to jag a couple of extras from the pocket, keeping the Dockers chances at bay until some lazy last minute goals blew the margin out. Freo hop on a plane tomorrow and head up to Cairns where they will play Melbourne on Monday night.