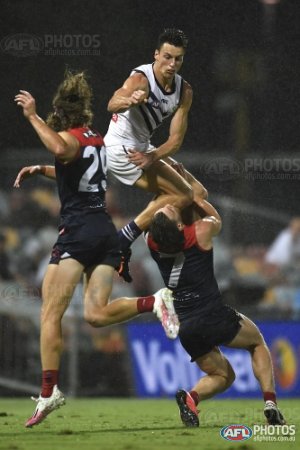 In one of the great traditions of the club, Fremantle have managed to ruin Melbourne's season once again, with an heroic victory against the Demons in the pointy part of Queensland. In conditions not experienced by a Fremantle team since the North Freo Soap Factory disaster of 1896, the Dockers struggled to make the most of the slippery ball up in Cairns. They had plenty of practice though, dominating the football for most of the night but still struggling to get the ball to go between the bigger two of the four sticks as often as is generally considered competent … with the exception of Michael Walters who kicked half of Freo's score. In a low scoring, hard hitting contest, the Dockers lead all night, but did get a scare in the last quarter when Melbourne managed to get a bit of a run on. Luckily, Adam Cerra is a freak and, despite being covered in layers of sweat, rain, and XXXX, was able to slot one through from Fitzroy Island, to seal the game for Freo and bring Max Gawn to tears. The Dockers get nearly a full week off now, playing on Saturday afternoon against North Melbourne.