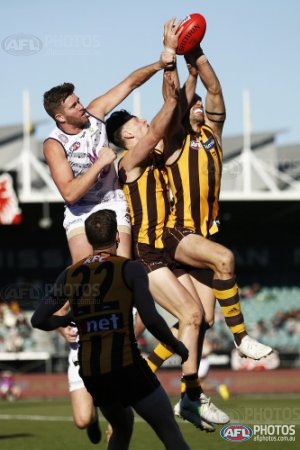 Remember when Hawthorn were good...yeah, nah, you probably don't. It was so long ago and it certainly doesn't look like happening again any time soon. On the back of a two week horror road trip, on the run from a deal virus sweeping the country, travelling over land and sea and then double back because they'd forgotten a player, suffering under the long standing curse of captains playing milestone games and playing at a ground where their only previous win was in a tribunal room 5 days after the siren had blown (twice), Fremantle absolutely pants the Hawks and humiliated their entire organisation. They must have known they were in trouble when they got through the first 5 minutes of the game and they didn't have at least a 4 goal lead, as Fremantle have traditionally afforded their opponents. But when Fremantle were in front at quarter time, it was all over. David Mundy once again hit his stride in the second quarter and carved the fancied Hawthorn midfielders up, together with Nat Fyfe, and Andrew Brayshaw, they were unstoppable. Rory Lobb was having a field day in the forward line, on track to kick 8 but the notorious Launceston wind gave him trouble and he had to settle for 4. It was a win of epic proportions that people will sing songs about in the years to come, putting Fremantle into the top 8 and setting them up for what many believe will be a highly successful premiership tilt.