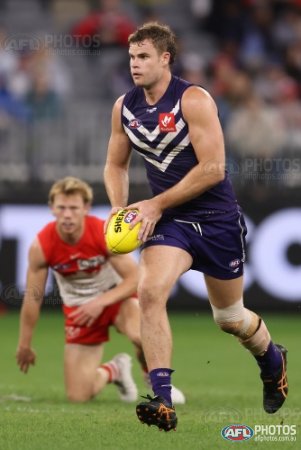 Hundreds of Fremantle fans braved the coolish weather to enjoy one of the games of the season, as Fremantle got home in a thriller. In perfect conditions for football, it was a tale of two harbour cities. One tacking into the wind, regardless of its direction, each drive forward carefully planned and cautiously navigated but and missing the target by quite a way, the the other unfolding the spinnaker and sailing the ball through effortlessly. Sydney had barely missed a shot at half time while Fremantle were still collecting some of the footies from their attempts. But the Dockers put an end to Sydney's run in the third quarter by not letting them get the footy anywhere near the other half of the ground. It was ferocious footy by the Dockers, keeping the Swans to one point for the quarter despite Fremantle accuracy getting much worse. When Adam Cerra booted a goal into the Swan River on the three quarter time siren, he gave Fremantle a two goal lead at the last change. The Dockers looked like they were going to cruise home. Unfortunately Sydney fought back with the opening three goals of the last, taking them into the lead. Treacy booted a goal from the square, bringing the house down and giving Freo the lead back but Buddy Franklin replied, and the Swans looked home...until Nat Fyfe found his kicking boots and, with precision and skill, got the arsiest bounce of the century to win the game for Freo.