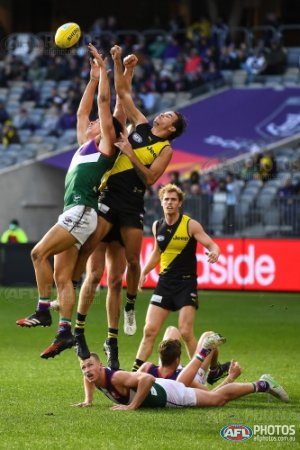 It was a rough day to play football, particularly if you were a 36 year old fighting off suspicions of a comb over, with the sort of wind that made the lack of any tall blokes in the team a big advantage. And while the scoreline reflected something you would have expected to see when Fremantle were wearing the green and purple jumper, Fremantle triumphed in courageous fashion. It was all Dockers in the first quarter, dominating in the air and on the ground...but with the traditional inability to kick straight. The Tigers followed Fremantle's lead in the second quarter, piling on the points as the wind did crazy things to the ball. They went neck and neck in the third, with the Tigers creeping closer before taking the lead in the last quarter. With the wind blowing for Richmond and a player down, Fremantle needed something special and that something special was Lachie Schultz, hurling himself into a pack to rise above them and pull down what many are call the mark of the decade. Fremantle kicked on and got home by 4 points, and jumped back into the top eight.