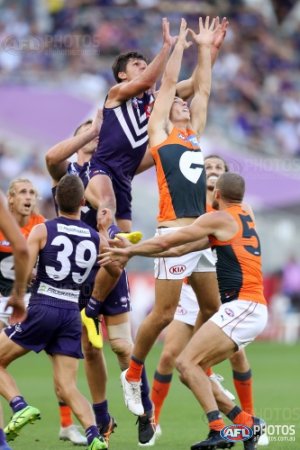 Fremantle's stocks are on the up again, after humiliating the once fancied GWS Giants in a display of force some have labelled arrogant, for that fact that Fremantle appeared to be deliberately missing easy goals to try and keep the Giants interested. From the opening bounce it was all Dockers, with a steady stream of goal..scoring shots, as well as a few goals. David Mundy played like he'd been syphoning off the blood of younger players for his own infusions (which is just a rumour...but when was the last time anyone saw The Owl?), while Brayshaw and Cerra continued to push the old man to see what it would take to make him break. Nat Fyfe was quite handy too but had to leave the ground early because of concussion or possibly because he was embarrassed at some of his goal kicking efforts. Lachie Schultz took over the Michael Walters role and dobbed 3 goals for his trouble, helping Freo to a 31 point win.