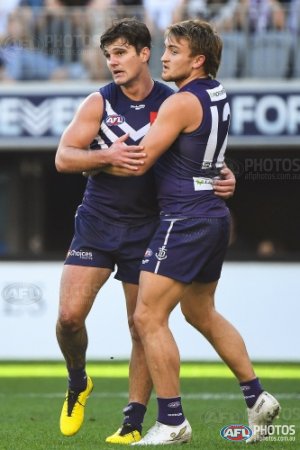 It was a beautiful day for a game of football and Fremantle and the Gold Coast had a decent crack at playing one. They probably fell just short of the mark but good on them for having a crack. There were some concerns that Fremantle might have trouble with the Gold Coast, on the lack of Nat Fyfe but they were misplaced concerns, mostly because the Gold Coast were lacking anything. Fremantle didn't fix any of their slow starting issues, however. With just 3 goals in the first half, they did well to be in the match, let alone be in front at half time but a third quarter blitz was just the tonic for a bit of a lacklustre game, delighting the fans that had bothered to wander down to Burswood for a look. Josh Treacy looked impressive at full forward again, Alex Pearce stepped back like he'd never left, Sean Dacey dominated and David Mundy was at his best. Freo by 27.