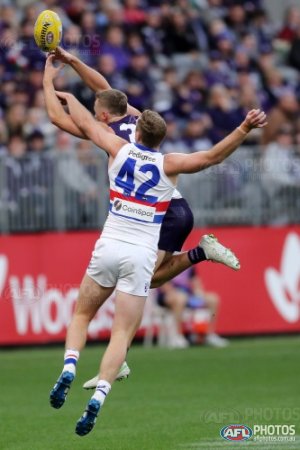 Fremantle versus the Western Bulldogs...it was an odd game. Like watching cats play Hungry, Hungry Hipppos. You weren't sure if you should be applauded at how bad they were at it, impressed that they could do it at all or annoyed with yourself that you'd bought a ticket to see cats playing Hungry, Hungry Hipppos. The game was there for Fremantle to win but they seemed to go out of their way not to. If it was Round 23, they'd be accused of playing for draft picks. From the terrible kicking at goals, to the strange inability to kick to the forwards wearing purple, to the entire team seeming to think Aaron Naughton was a Docker. Yet for all that, they were still within three goals of turning it around for most of the game, and 10 minutes of good footy could have covered for all the other mistakes. Unfortunately they didn't have 10 minutes of good footy in them, and the Doggies rolled home to win by 28 points.