Fremantle Surge Up the Ladder 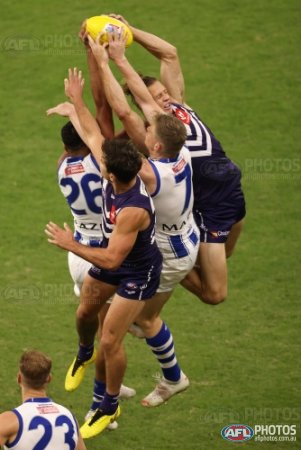 If a football team is smashed and no one is there to see it, do they really get smashed? Yes. Yes they do. For one thing, there are cameras recording it in all it's brutal glory. Coming off a short break, a virus outbreak, the complete lack of supporters at the game and the continuing issue of having to see Tobe Watson's hair every day, the odds should have been stacked against Fremantle. Thankfully they were playing North Melbourne though, and all the drama in the lead up to the game counted for very little. Fremantle really only got out of a trot for a short period in the second quarter, sealing the game before the frozen meat pies were warmed through. Mundy was brilliant, Serong was everywhere, Taberner dominated up forward and Fyfe can't kick goals...so much the same as the previous few weeks but more of it. The only downside was that Brennan Cox busted his ankle, however he should be ok to play next week against the Eagles, as most of the defenders are expected to spend most of their time sitting in folder chairs playing canasta.