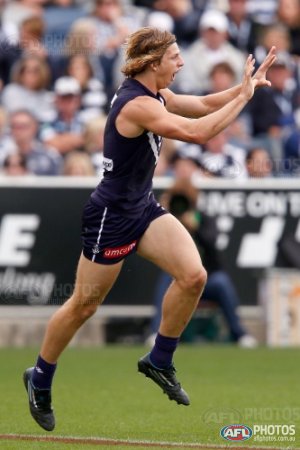 There was a tinge of sadness to Fremantle's demolition over Geelong, with it likely being the end of an era of epic contests between the two teams. As the Cats fade ever faster into obscurity, Fremantle put in a near perfect performance to strengthen their claims to be the first undefeated premiership team in the history of the AFL. Fremantle had winners all over the ground, David Mundy with the ball on a string, Stephen Hill effortlessly delivering the ball onto the chests of forwards, Nat Fyfe doing Nat Fyfe stuff, Sandilands dominating the sky, Danyle Pearce racking up the kicks and Michael Johnson managing to hold Tom Hawkins upright and tripping on him whenever he had one of his fainting spells. The game was over before the halftime toilet queue had cleared, with Fremantle playing most of the second half just for the percentage. The final margin still probably flattered the Cats, with the Dockers cruising home to a 44 point win.