Fremantle's Undefeated Season Gets Off to a Good Start 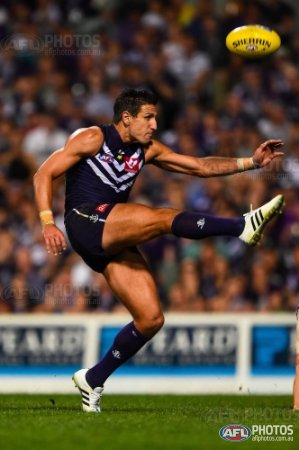 Fremantle have continued with their firm belief that there's no point peaking in April, getting the job done against Port Adelaide but leaving themselves with plenty of things to work on and keep them occupied until the season gets to the business end - all except for Matthew Pavlich who should have put his performance in a glass box for a display in some sort of sport museum, so future generations can get a glimpse at classic Pavlich. Pav booted 4 of Fremantle's 11 goals, didn't look like missing and even had a stint in the midfield when the game looked like it was headed for the toilet in the first quarter. He steadied the ship and got Freo back in the game, then lead the fight through to the last quarter when Fremantle took back the lead and crushed the Power into the Subiaco turf. Nat Fyfe was, of course, sensational, Michael Waters looked like he could settle into a regular midfield spot nicely and David Mundy appears to have conquered time. Next week Fremantle head to Geelong to settle another score.