Fremantle Wrap Up Practice Matches With Another Win 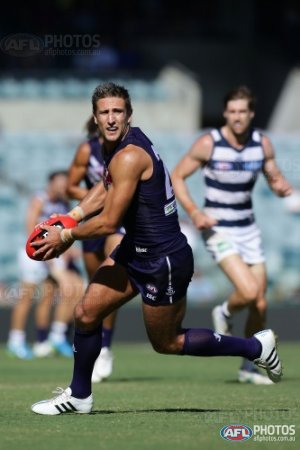 A crowd of hundreds turned out to watch Fremantle complete a clean sweep of the 2016 NAB Challenge, with an entertaining come from behind win against Geelong. The Cats appeared to be taking the final scratch match of the season a little too seriously, with Fremantle trying out some last minute experiments and new players. David Mundy decided he'd better make a rare pre-season appearance now that he's captain and picked up a couple of kicks while newcomer Harley Bennell had everyone talking for all the right reasons. Even without the silver service from Aaron Sandilands, who had a rest to give his round 1 suspension replacements a run, Lachie Neale played the engine room role with Nat Fyfe continuing to require sedation from the runner lest he burn himself out before Round 1. Cam Sutcliffe looks like stepping up and becoming an important player in 2016, with Michael Barlow enjoying being played in the midfield again. The defense looked solid, although not entirely committed to the pre-season spirit while the forward line looked a mix of confused and phoning it in for most of the game but still managed to outscore the highly fancied Cats forward line, with a couple of super goals pushing them home. The real stuff kicks off in a couple of weeks with Fremantle taking on the Bulldogs early on Easter Sunday morning. So hopefully the Easter Bunny hides the eggs somewhere easy to find.