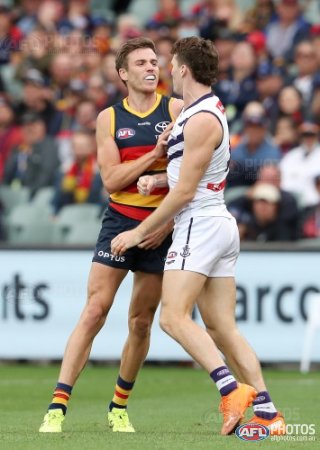 You know it's been a good result when the first thing you do after the final siren is check the ladder. Equal on points with Richmond is how it will be described to anyone making eye contact with a Fremantle supporter this week after the Dockers took down the once fancied Adelaide Crows at Football Park. It was no small feat either. After a bit of a flat start from the Crows, where Fremantle took their first lead of the game, Adelaide threw everything they had at Fremantle. The Dockers absorbed as much as they could, with Luke Ryan and Griffin Logue heroic up back, but it looked like Adelaide would eventually roll over the top of them. Freo were having none of that though, they took back the lead, lost it again, took it back again and then powered home to put Adelaide 4 goals down without enough time to kick them all.