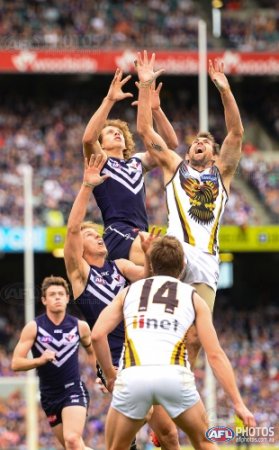 Top of the ladder for 11 rounds now, Fremantle will go into the game this week as the underdogs with the bookies for the first time this season. It could be because they’re playing the very popular recent entrants to the top 4, Hawthorn Hawks who famously defeated Fremantle in the 2013 Grand Final or it could be because the game is being played in Bloody Tasmania, freezing cold and a very long way away from Fremantle - for a city of people who traditionally feel the need to pack a bag to make the journey over the 150 metre bridge into North Fremantle. There was some early speculation that Fremantle would take the opportunity to give a few hard working types a bit of a rest back in Perth for this game and send over the B-Mantle team but that would have meant the selectors would have had to learn a bunch of new names. Instead they’ve thrown Mzungu and Sutcliffe back onto the extended bench with Jon Griffin a possible chance to replace Aaron Sandilands if the AFL send the small plane over again.