With win over bottom team 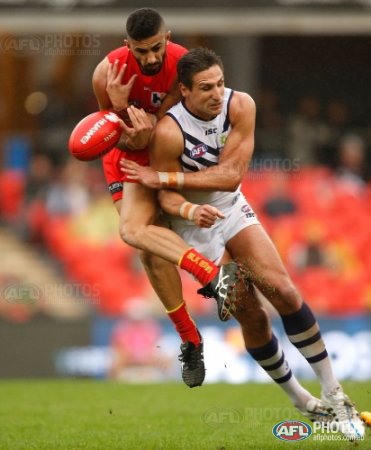 Fremantle go into the mid-season bye with 10 wins on the board. Our memories will record each win as being more glorious than the last when the 2015 flag is discussed in the years to come, some of the newspaper clippings might record some of the games slightly differently, for example, the game against the Gold Coast. It was a long way away, the week before a holiday, a little bit wet, no one had bothered to come and watch and the level of orange at that place would even disturb the Dutch. Fremantle played accordingly, unable to grab a clean footy and doing some kind of interpretive jazz version of goal kicking that saw them kick less goals than the Suns but still bring home a 7 point win. Things got a bit tight towards the end, with the Gold Coast getting within a kick of taking the lead, dangerously close towards the final siren, but Fremantle's determination to kick the ball between the tallest of the sticks at least once a quarter saw Nik Suban getting close enough not to make a mistake of it and seal the victory.