This has the makings of a Ponzi scheme 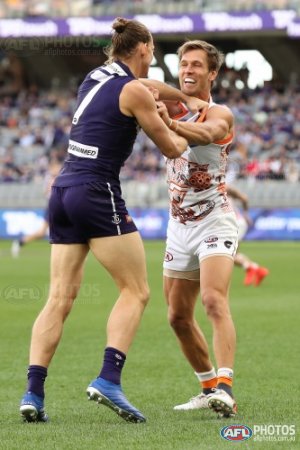 Fremantle have declared that they are gunning for Richmond, after making sure they kept themselves fresh in their match against the Giants. The Dockers set themselves up for a shoot out against the Giants but forgot to load the gun, with Fyfe being destroyed by Matt deBoer, Michael Walters wandering around like he wasn't sure where the football was, Caleb Serong forgetting his boots and Rory Lobb too embarrassed by his run up to take a mark. The effect was not quite what they were going for, with plenty of goals being kicked, just by the other team. The Giants kicked the first 4 unanswered goals, toyed with Fremantle for three quarters and then blew them apart as they entered three quarter time, only some late goals from Fremantle keeping the margin under 50 points. Fremantle now fly to Queensland for the rest of the season, first up is Richmond on Wednesday.