Fremantle On Track For First Flag 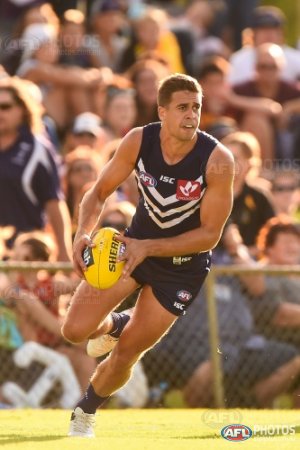 Fremantle supporters look to be in for another long season, with their 10 goal win against Richmond showing that once again they will be an awesome force of awesomeness, with the real question on whether they can beat Hawthorn in September still months away. Fremantle looked good where they always look good, dominating in the centre and outmaneuvering their opponents. Sandilands was great, Barlow was everywhere, Walters was brilliant and Pavlich could still be playing when he's 40. Nat Fyfe popped in for a second half cameo and doesn't appear to have forgotten how to play football. The forward line looked like it could have an extra dimension to it this year, with Matt Taberner bringing in some strong contested marks and Jon Griffin floating about in support. In defense, things seemed to go well without McPharlin (although Richmond didn't press them too hard) with Spurr and Ibbotson handing the ball in their usual cool manner, Zac Dawson playing some more attacking footy and Alex Silvagni getting a game. Of the new blokes, Darcy Tucker looked handy, getting plenty of the football and Sam Collins will be better for the run.