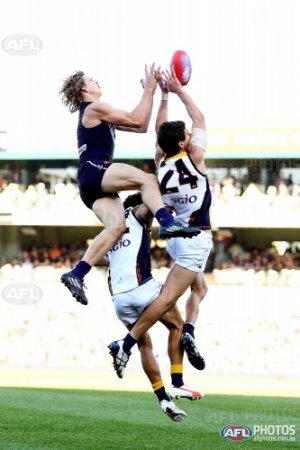 With the minor premiership in the bag, Fremantle have decided to experiment with a few young players and give the squad a bit of a stretch as they countdown the last few weeks of inconsequential home and away games while the leper teams fight it out for the scraps. One youngster that looks quite promising is a kid from Lake Grace calling himself Nat Fyfe. Fyfe is a 190cm half forward who looks a likely type, although reportedly has a bit of a temper. Another player to watch out for is Michael Johnson. He’s had some injuries of late but, despite his young age, has shown a real flair for running off the half back line as well as pointing out where other people should be running. Clancee Pearce and Connor Blakely have also been added to the long interchange for the Sunday game, with Lachie Weller being given a much needed rest. The Eagles have lost Selwood and McGovern to “injuries” while Mark LeCras is out due to a discipline problem. They appear to have rounded up people from one of the local parks and added them to their squad as replacements.