Fremantle Give Lesson On How To Hold a Lead

Finals Back on the Cards 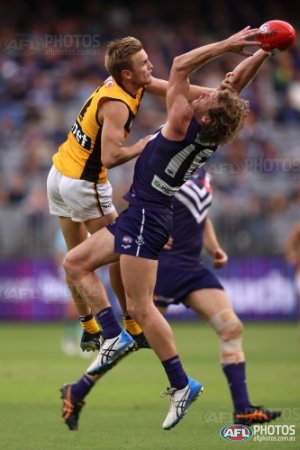 A recent study concluded that being out in strong winds can have an effect on the inner ear, which will affect balance and coordination. That study was conducted in the Fremantle forward line during their last three quarters against the Hawks. The Dockers started magnificently, running amok in the centre and kicking goals which delighted and inspired the crowd. It looked too easy. It was. Hawthorn kicked back in the second quarter and Fremantle's poncing about with the ball started to become a bit of a concern. The Hawks started to whittle away at Fremantle's 32 point lead and were in striking distance at half time, as the two teams walked off to the stunned silence of the crowd (and probably something by Hunters and Collectors), it got tight in the third quarter, the crowd got restless but then Michael Fredricks and Health Chapman steadied the ship with some fancy footwork, before the Dockers kicked home in the last quarter to finish the day comfortable winners and on the edge of the 8.