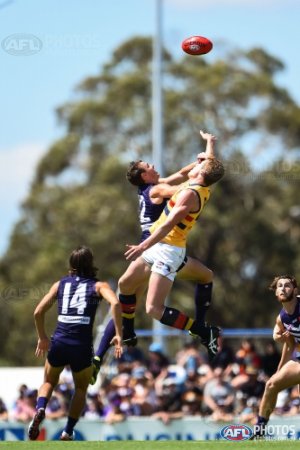 Adelaide got a taste of the big city when Round 2 of the NAB Challenge headed to Mount Barker. The locals turned out in force to support Fremantle and pass a few hours, disappointed at the late removal of local boy Aaron Sandilands (who'd been rested to avoid another Hulk based incident) but were thrilled by the appearance of Tony Modra who was wandering about asking people for a bite of their ice cream or a handful of their chips. They weren't disappointed with the football either, with Fremantle and Adelaide treating them to one of the best games of football ever to be played at Sounness Park...in February, between two AFL teams, in a leap year. It was a well played scratch match, not too physical but with plenty of running about and some reasonably handy skills. Nat Fyfe seemed to be unaware of the scratch status of the match and played like he thought there were Brownlow votes on offer, with daylight not disgraced as the next best on the ground. Tom Sheridan put his hand up for a more prominent role in 2016 and Matt Taberner threw his weight around up forward, despite struggling with some of the more nuanced parts of his game. Kicking, for example. Nick Suban and Brady Grey went toe to toe for a spot on the half back flank and Michael Johnson handled his first game of the season well, but disappeared, with Pavlich and Dawson, for the second half Presumably because the game was clashing with their Sunday afternoon naps.