Fremantle Desperate To Find a Challenge 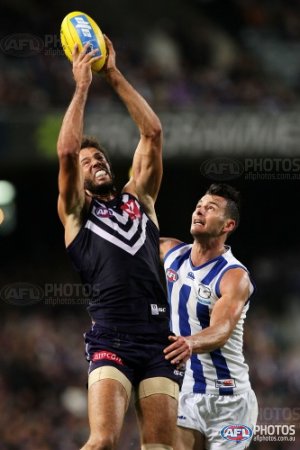 Ross Lyon is concerned that his team will develop a soft edge after spending the first 8 rounds of the season without a decent hitout against a competitive opponent. Fremantle went through the Kangaroos like a knife through butter, once again locking up the 4 points by quarter time with a football exhibition. North Melbourne could do little but run interference against the Dockers and looked like they belonged in a different league to the Dockers for most of the night. By the last quarter, things were getting so bad that Ross Lyon decided to sub off Matthew Pavlich to see is it gave the Kangaroos a look in It didn't and Fremantle ran out to a 73 point win. Nat Fyfe fell just short of 40 possessions in his 100th game, Michael Walters dobbed a lazy 43 goals and Clancee Pearce is claiming he got in 301 pinches on Brent Harvey.