Fremantle come a cropper due to rain

and lack of skills 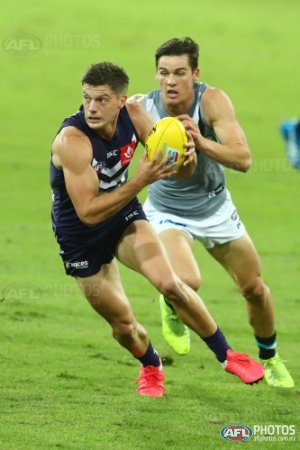 Fremantle were primed and ready for a season defining match against Port Adelaide. Port were coming off a big win but they'd travelled a long way, under the stress of leaving home for a few weeks in a row, and Fremantle were settled in razor sharp from having nothing to do all day but work on their football skills. Times be crazy though and Port Adelaide seemed to look fresher for being out of South Australia, and Fremantle's skills were far less precise than we'd been led to expect. Still, the Dockers gave a good account of themselves in the first quarter, matching the Powers belligerence and sneaking through a few goals to look almost offensive at times. It was all shaping up to be a great contest, until Fremantle clocked off and let Port Adelaide run amok in the second quarter. Then when the rain came down it was time to just make sure everyone gets paid and home without catching the sniffles, Fremantle settling for the 29 point loss but first crack at the dessert cart.