Four Quarters Are For Squares 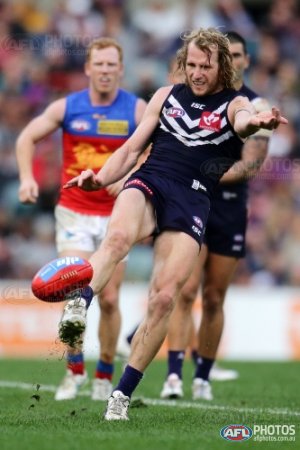 Four quarter - who can be arsed playing all of them. Ross Lyon has always been the sort of bloke who likes to as much as needs doing. No more and no less. Be it the zip on his jacket, seeing out a contract or playing a game of football. It was an exciting start from Fremantle with a couple of quick goals, obviously just enough for the Dockers to get Brisbane’s measure. From there they realised they were safe to bugger about a for the next three quarters while Brisbane did their best impression of a football team. Depending on the location of your seat, either some much needed rain fell or there was a bloody torrential downpour in the second quarter and the Dockers took the prudent decision not to stretch their hamstrings too strenuously, often barely even bothering to swing their legs when kicking for goals. The third quarter was spent practising some important cicle tactics, with Michael Barlow breaking ranks and lairising with a snap in front of goals, just to make sure Fremantle had the lead going into the final change. It wasn’t necessary though. Once the weather had cleared, Ross gave everyone a license to lairise and the game went from a close contest to shellacking in a matter of minutes.