Fremantle thumped in Round 1 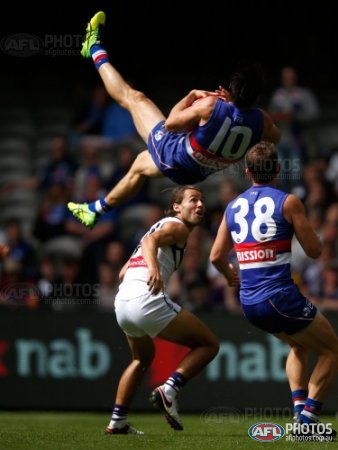 As starts to the season go, it was a shocker. After a strong pre-season with a focus on skills and an expectation that the phrase ‘Fremantle Dynasty’ would get a lot of use before the end of the decade, Fremantle opened the year doing a very good impression of a rabble having a bad day. No goals and very few attempts to stop the Bulldogs from kicking some, saw the Dockers 41 points down at the first change. Things turned comical in the second term when Chris Mayne finally looked to have kicked the Dockers a major, only to have a video review find a couple of molecules of the football came in contact with the padding of the goal post and the score judged to be a behind. It took about an hour from the start of the season before Fremantle managed their first goal, with Michael Walters cleaning up after Hayden Ballantyne. It wasn’t the opening of the floodgates that many had hoped for, unfortunately. The next goal came from defender Nik Suban, halfway through the third quarter. They briefly flirted with competence at the end of the third term to keep their names out of the record books but nothing came of it and by the time Easter lunch was cooked, so were they. Bulldogs by 65 points.