Eagles Barely Make it 8 in a Row 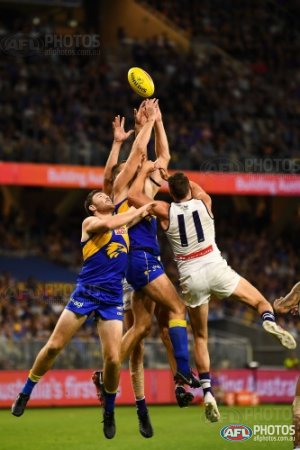 Fremantle continued to play football like it was their first day meeting each other, yet still managed to go narrowly close to rolling the previously highly regard West Coast Eagles. The Dockers didn't appear to have any idea how the game of Aussie Rules worked for most of the first half, bumping into each other, kicking the ball to random positions on the ground and seemingly unaware that the ball should ideally go between the big of the two goal posts. A refresher video at half time got them in the general area of playing football but they still struggled with the concept of the 4 posts. Luckily for them, the Eagles are just awful at everything and could barely do any better. Freo came close to pushing past them a couple of times but whenever they looked like they might just pull off a win, they'd do something stupid or forget how to kick the football. David Mundy was good all day though, and unlucky not to take home the Border Ravi Shankar Pewter Mug for best afield, or whatever they've decided to call it now. West Coast won by 13 points.