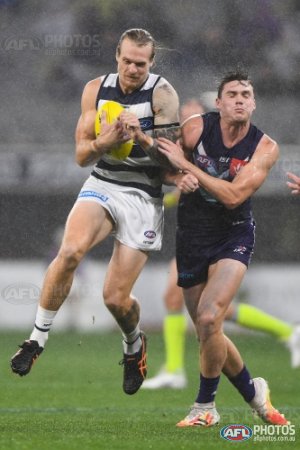 Bushfires, floods, viruses, someone mentioned murder hornets at one point, just when you think 2020 has punched itself out - BAM - it throws another punch at you. This time a strange wet substance just started falling from the Perth sky. The Fremantle players just assumed the game would be called off while a team of scientists studied the phenomenon but apparently it's a common thing in the uninhabitable parts of the world, like Victoria, and the game went ahead. Unfortunately. Fremantle lost Darcy Tucker in the opening minute of the game and somehow as a result of that played the rest of the night about 8 men down, with the remaining players not adapting as well to everything being wet as you'd hope they would when they're playing the Swamp People from Geelong. Geelong barely noticed the weather, they were a bit spooked by the crowd that so, while Fremantle didn't score a goal until well into the third quarter, and only managed 2 goals for the game, they were able to keep the loss down to just the standard 31 points.