Craptacular! Fremantle back in winners circle

Sydney, have a look at yourselves 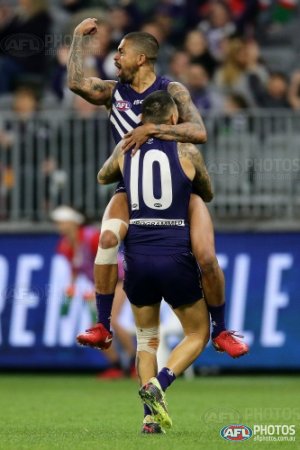 There have probably been worse played games of football than Fremantle and SYdney's Round 18 effort but it's likely that those participating agreed never to record the transpiring and never to speak of the game again. The sad part is that it was a big improvement from Fremantle's previous four weeks, with the Dockers managing to kick at least one goal in every quarter and 7, count them... 7, for the match. They didn't look like getting there early on, also later on and a lot of the parts in the middle with targets missed by several metres at a time, tall forwards getting flat passes, small forwards getting long bombs and everyone still refusing to kick the ball anywhere near Cam McCarthy. But get there they did and each goal was crucial because Sydney were just as terrible. It was tight in the end though, and the last quarter came down to who could scramble through the most points and then bugger about with the footy until the siren went - Fremantle had finally found something they were good at, sneaking home by a point and agreeing to never speak of it again.