Carnage at the MCG 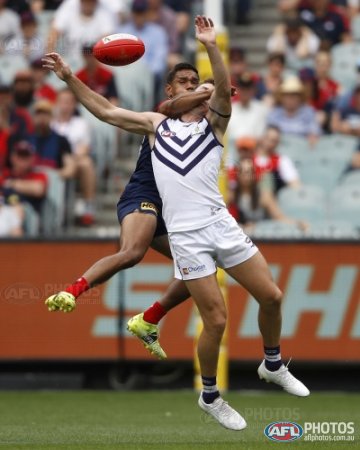 Sometimes after the opening game of the season you'll hear the expression "better for the run" but running seems to be causing Freo a lot of trouble at the moment, with most of their big blokes hobbling off the ground or starting there. It was a tough afternoon for the rest of the players, who struggled to get anywhere near the ball if it was kicked high and had most of their kicks picked off before the footy could get within range of their little mates and their little arms. It was never going to end well but Fremantle showed plenty of spirit and kept within striking distance for most of the day. They just had nothing to strike with, and the game plan fell apart every time a player looked up and saw nothing but out classed Freo midgets or cripples. The Demons got a bit of a run on in the last quarter to shut the door on Freo, but the Dockers were still able to claw the game back to a respectable 22 point loss, that could have been a lot worse. Next week's game is in the hands of the medical staff now.