Barlow Leaves Gap In The Middle

Promises to cover up with a singlet in the future 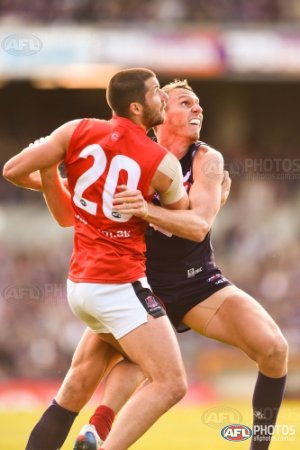 Fremantle are playing Melbourne in Darwin this week. None of that makes any sense. But the way the AFL are running the fixtures, just be thankful it's on a Saturday night and not 4pm on a Wednesday afternoon. After limping into the midseason bye, Fremantle supporters are excited about all the players who will be returning to the side this week, fresh from the break and fully recovered from their injuries. Of course, Fremantle supporters are a very optimistic group of people who are uniquely resilient to constant disappointment. Michael Barlow was in earlier in the week but he's out again now, Jon Griffin is back after recovering from a hamstring virus which means Zac Clarke and Jack Hannath are out because we don't want to get silly playing tall blokes. Ed Langon is back, presumably because an administrative error saw him dropped in the first place and Garrick Ibbotson has been given a reprieve after promising the coach he has remembered how to mark the football.