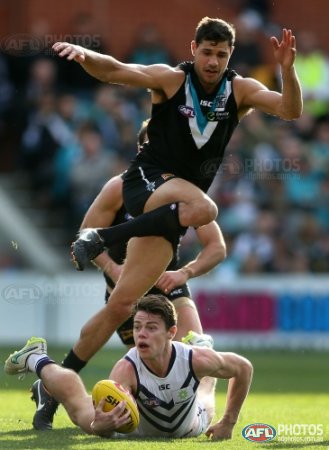 Despite half the team staying home to rest up for the premiership lap of honour, the Fremantle hopefuls, youngsters and list cloggers came out firing against a Port Adelaide team desperate to salvage some self respect. The Fremantle midfielders dominated against the highly rate Power and spoon fed the Fremantle forward line with lace out delivery, before the forwards sent the ball in the general direction of the goals. Some of those goals went in, and the Dockers took a commanding lead early. Unfortunately Ross Lyon got a bit carried away with himself and decided to stick with his regular plan of putting the handbrake on once Fremantle had a big enough lead...Sometime around the middle of the third quarter, the Dockers scored again to get them within 5 goals of Port Adelaide, who had hit a patch of competence. There was great relief just after that when Lachie Neale was subbed off, preventing him from starting another fight and getting suspended but there wasn't much action from there on. Port Adelaide celebrated the dance with their sister with vigour and Fremantle will go into the finals in good health.