A Bridge Too Far For Walters 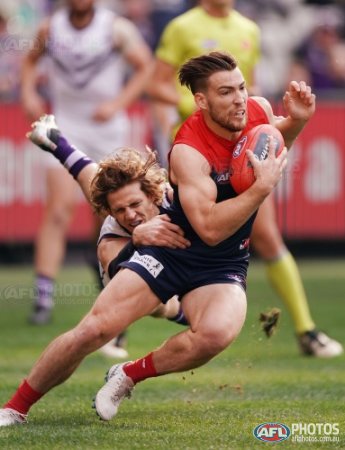 Fremantle's run of last minute, come from behind thrill a minute victories have finally come to an end, with even Michael Walters unable to carry Fremantle over the line this time. He had a fair crack at it but Melbourne had the legs in the last quarter, coming off the bye and playing most of the game with a couple of extra players after Fremantle lost Stephen Hill and Jesse Hogan with various leg complaints early in the match. It was a good contest between two middle of the road teams, plenty of mistakes which they more than overcame with their gusto. The Dockers looked like they were going to make an easy afternoon of it in the first quarter, skipping out to a three goal lead in fine style before Melbourne got their act together and evened the game up by half time. From their the two sides went goal for goal, some brilliant, some a little bit cringeworthy but neither side backed off. It was anyone's game right up until the last few minutes when Melbourne skipped ahead, and Fremantle looked cooked. There was always hope though, with Walters lurking in the forward line but he couldn't fid the magic this week and Melbourne got home by 14 points.